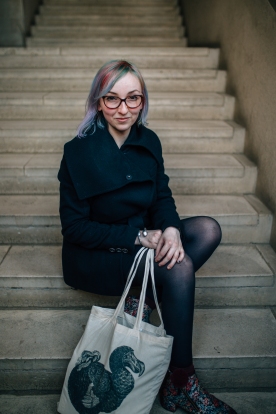 I am a researcher in Science Communication, the History of Science & Literature, with a background in Communication and Media Science and Comparative Literature.

My doctoral thesis on Dreams and Visions in Victorian Psychology  Fantastic Literature established the latter as primary medium to digest and communicate new scientific knowledge, its societal and epistemological implications. Moving on from Oxford, I joined the Department of Sociology at the University of York to work on Science and Narratives, and scrutinized Covid-19 narratives, especially those constructing it as war and conflict, and how they shaped public understandings and behaviours (read more here and here).

I have taught for universities in the US, UK and Germany, and several Oxford Colleges, specialising in 19th & 20th century literature, Literature, Science and Religion, Children’s and Fantastic Literature, Science Fiction and Visual Culture. Besides my academic work, I am an active science communicator, working with national and interantional media, as well as with museums and schools.  I have been involved in a broad variety of school outreach projects, from media literacy, AI, climate change, to journalism, and English Literature.

My doctoral thesis explored the emergence of Victorian psychology and fantastic literature as sister phenomena through the work of the author-scientists George MacDonald, Lewis Carroll, Charles Kingsley and H.G. Wells and their literary portrayal of visions experienced in dream, illness and near death. Considering these works in the wider framework of the Victorian history of science, I establish fantastic literature as a primary medium for ‘making visible’ epistemological debates of the nature of consciousness, and the nature of the soul, early ideas of the subconscious and dream theory to evolutionary psychology, thus challenging the perception of Fantasy as an escapist genre.

My research interests lie principally in the long nineteenth century, English, and European Literatures, but I am also interested in post-modernist multimedial re-imaginings. More specifically, my work covers the following areas:

I have written on the work of the following authors and personalities (amongst others):

I am an expert on Lewis Carroll, and have published articles on various aspects of the work of Lewis Carroll, including ‘The stupidest Tea-Party in all my life: Lewis Carroll and Victorian Psychiatry’, the first in-depth exploration of the origin of Lewis Carroll’s portrayal of madness. A forthcoming article, ‘Poeta Fit, Non Nascitur’, explores the author’s preoccupation with Victorian performance science, photography, psychiatric theory, and comedic catharsis. My article “From Scotland to Utopia (via Hammersmith): William Morris, George MacDonald and the Utopian ecological aesthetic” multifaceted Victorian preoccupations with ecology.  My research interests are versatile, and interested in public perceptions of science and science communication, and I have thus written on Fairies and Dreaming for Harvard University, about Victorian Insect-mania for the Royal Entomological Society and Alice in Cyberspace for The Conversation, or about Dickens, Time-Travel and Near-Death-Experiences in “Back to the Future: The Time Traveller’s Traumatic Jetlag in A Christmas Carol“, which appeared in Dickens on the Move – Between Cultures and Continents. 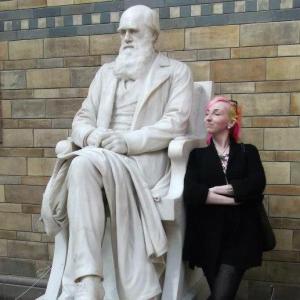 Charles D. and I at the Natural History Museum, London

I am (history of) science communicator in research and practice and have appeared on international broadcast, including BBC4’s In Our Time, CBC Radio’s Ideas, ARTE’s Invitation au Voyage/Stadt Land Kunst or TRT’s Showcase, and the Birmingham Literature Festival. Several of my shorter pieces and journalistic features have appeared in Newspapers such as the Oxford Mail,  The Conversation, and Liasons – Magazin für den Kulturaustausch.

I have also acted as curator and consultant for  award-winning exhibitions including ‘Insects through the Looking-Glass (Story Museum & Royal Entomological Society, 2018) and most recently the critically acclaimed Marvellous Mechanical Museum exhibition at Compton Verney.

I have in the past worked as a translator for Marvel Comics and I frequently give public talks and interviews (see papers&talks section), and am involved in several public engagement projects, such as Oxford’s Alice’s Day. As a mezzo-soprano I am a member of classical choirs as well as the Gilbert & Sullivan Society of the University of Oxford, and enjoy photography, drawing, nature and the theatre.

If you find my work interesting and would like to contact me, invite me as a speaker, or follow even more of my online-ramblings, you can find me on twitter, on Pinterest and on academia.edu, or feel free to send me a message on facebook, add me on LinkedIn or simply send me an email [franziska(at)kohlt.com].